A recent RE/MAX survey conducted by Leger found more than one in four Canadian homebuyers report feeling pinched by the stress test, which came into effect in January of this year. However, projections for the spring market show optimism with most markets expected to remain stable or improve.

The average residential sale price in the Greater Toronto Area dropped to $753,747, down almost 10 per cent from $834,144 in January and February of 2017. With move-up buyers driving the market — many of whom are making their second or third transition — alongside a booming condominium market, prices are forecasted to soften throughout the year. Not all regions in Ontario are being affected like the GTA. In Ottawa, the average residential sale price in January and February was $388,289, up four per cent from the same period in 2017, and Kitchener-Waterloo saw a five per cent price increase year-over year.

At the same time, the average residential sale price in Western Canada continues to increase. Greater Vancouver saw prices increase almost 11 per cent in January and February to $1,051,513, up from $950,184 during the same period in 2017. Despite reduced unit sales, prices are expected to continue rising. While Victoria is mostly a seller’s market compared to Greater Vancouver, it has also seen an increase in average residential sale price, which was $831,000 in January and February this year compared to $761,000 during the same period in 2017.It is expected that government intervention and the stress test will continue to play a pivotal role in purchasing behaviour as we look to the months ahead.

The Leger survey found that four in 10 buyers have had to compromise on their purchase, and almost one in three opted not to purchase altogether. One quarter of buyers compromised on the size of their home, while 18 per cent made concessions on the location of their home.

Despite these compromises, 55 per cent of homebuyers say they feel like they can purchase the type of home that suits their families’ needs compared to 46 per cent last year.

In Alberta, first-time homebuyers looking for affordability in Calgary and Edmonton continue to drive the market forward, with single Millennials and young couples gravitating toward the relatively stable condominium market. The average residential sale price increased 1.4 per cent in Calgary to $481,775 in January and February of this year, up from $475,288 during the same period in 2017. Meanwhile in Edmonton, a wide variety of inventory offers good opportunities for buyers, resulting in a small increase in activity and stable year-over-yearprices to start 2018.

Interestingly, activity in Atlantic Canada experienced increased demand from first-time homebuyers, many of whom are young couples and families. At the same time, the condominium market is being driven by retirees who are looking to downsize. Prices continue to rise across most Atlantic markets, especially in Saint John where the average residential sale price in January and February this year was $201,328, compared to $168,956 during the same period in 2017.New residential and commercial development projects in markets across the country are expected to fuel demand. Cities most impacted will include Edmonton, Kelowna, Victoria and Fraser Valley in the West and Windsor, London, Hamilton-Burlington, Barrie, Durham, Ottawa, Saint John and Halifax in Central and Eastern Canada.

Despite all of the factors involved, the spring market across most of the country is forecasted to strengthen as we head into the warmer months. Supply is still low in many markets, and while the prices may not reach the same levels as this time last year, we are expected to see continued healthy price appreciation from the earlier months of this year across many regions in the country. 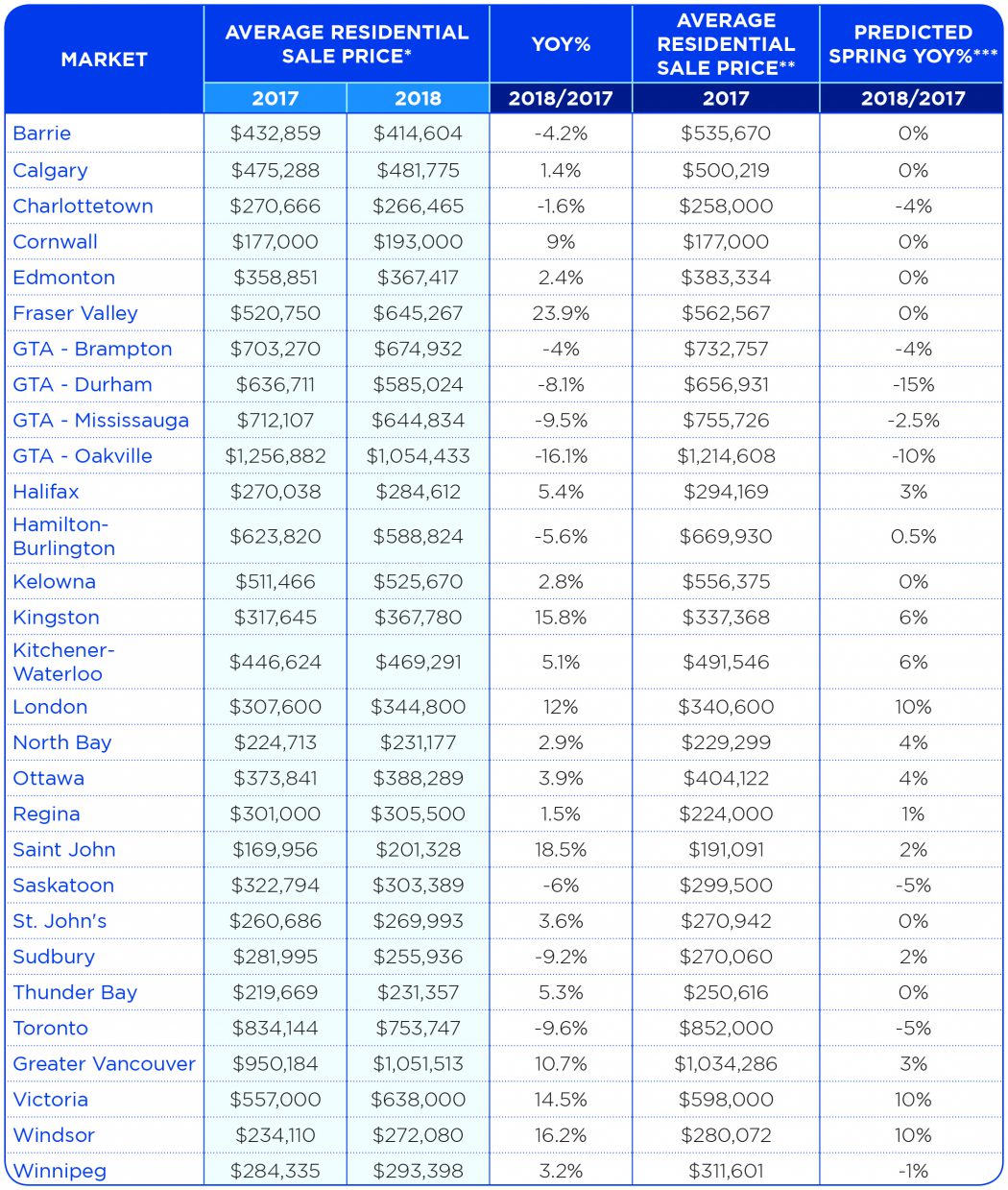 View all posts by: Cathy Berkhout-Bosse