It has been an active summer for real estate sales across the Niagara Region with 2994 unit sales reported during the months of June, July and August in the communities serviced by the Niagara Association of REALTORS®. This figure reflects a gain of 15.7% over last year’s total of 2588 transactions during the same three months.

The Local Picture: Welland and Pelham 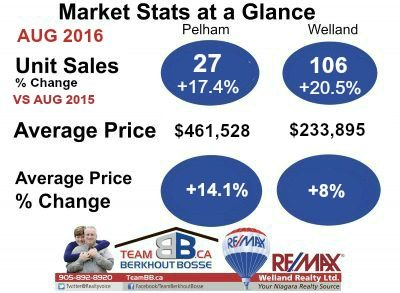 Pelham home sales continued to climb in August with 27 sales reported for the month compared to 23 in August 2015. According to the MLS statistics of the Niagara Association of REALTORS® there have been 176 units sold year-to-date in Pelham reflecting an increase of 14.3% over last year’s January to August sales total of 154 transactions.